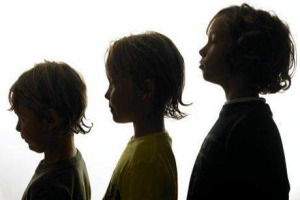 According to the theory of birth order, the child who is born first in a family tends to be hardworking, responsible and determined. The middle child is supposed to be competitive, outgoing and sociable, ¹… . But can your position in a family really have an effect, or are these ideas just silly stereotypes?

Scientists have been interested in this question for centuries and have given opinions both for and against the theory. Alfred Adler, an Austrian doctor working in the 1920s, believed that first-borns are special because at first they receive all the love and attention that the parents have to offer. ²… they can often suffer feelings of rejection because they are no longer the centre of attention. Adler also thought that in families with three or more children, parents are more likely to be indulgent with the youngest.

Although Adler didn’t come up with any scientific evidence for his ideas, ³… . Scientists at the University of Oslo checked the results of intelligence tests from over 240 000 people. They found that first-borns are, on overage, more intelligent than any sibling who follow later in the family. Other studies have shown than younger sibling tend to be shorter and lighter than first-borns, but it’s the difference in intelligence that continues to interest scientists.

⁴… Psychologists suggest that the adults’ role in bringing up the first-born child is as important as birth order. As there is no competition from other children, parents can dedicate a lot of time, money and resources (books, activities, classes, etc.) to the first-born child. When other children are born ⁵… . The eldest child develops mental and social skills by being a tutor to his or her younger siblings. Parents also tend to be stricter with first-born children and have high expectations of them. This may explain why eldest children are often quite traditional but also very competent.

Of course, these ideas about birth order will never be completely accepted, because for every family that fits the stereotypes ⁶… . But it can be interesting for parents to think about how they bring up their children and the differences between them as individuals.

Match the following sentences with the gaps in the  text

Learn some useful phrases from the text